With the Boys and Girls Club of Laguna Beach since 2002

Hired as The Club’s Athletic Director in 2002, Laroche’s basketball leagues have become an almost ubiquitous part of growing up in Laguna. With a thoughtful commitment to balancing competition and fun, something Laroche has brought to all of his sporting ventures, the kids flock to The Club to participate in his sports programs.

However, Laroche has had to leave the day to day running of his beloved gym to someone else. In April he was promoted to Canyon Branch Manager. Now, he gets to spread his influence to all areas of the Club. It is a change he welcomes, and one he sought out.

Working with kids is his calling

Laroche came to Orange County from Los Angeles where he worked at the YMCA, first as a camp counselor and then ultimately as its executive director. “When I was younger, in middle school, I volunteered to work in the cafeteria, play games with other kids…from day one I realized this was my calling, it was more rewarding for me. From that day on, it has always been about working with the youth,” he says. 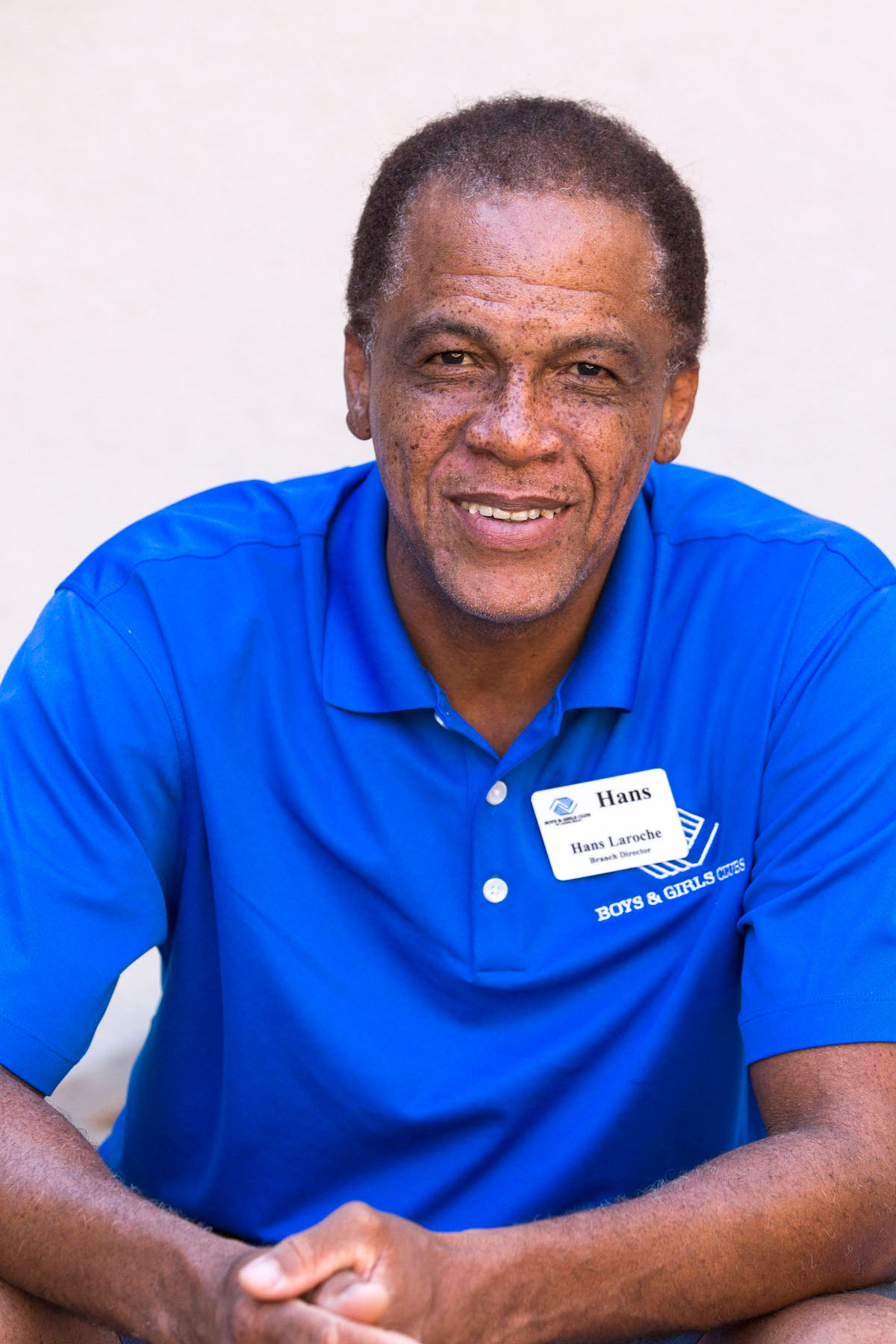 Hans Laroche, formerly the Athletic Director, now the Branch Manager at the Boys and Girls Club

Jumping at the chance to work in Laguna Beach

Laroche became friends with the Laguna Beach branch’s former athletic director. When he was ready to leave, he gave Laroche a call. “He knew I wanted to work in Laguna so he gave me the first opportunity.” Laroche made the most of it, becoming a beloved part of the club over the last 15 years.

Making a strong connection with “his” kids

I don’t use the word “beloved” lightly. When Laroche makes appearances at the local elementary schools, he is treated like a celebrity. The kids rush over to say “hi” and then just hang around him, happy to be in his presence. The kids can sense that when he says working with them is his calling, he means it.

From Haiti to Canada to the US

Born in Haiti, Laroche and his family emigrated to Canada where he stayed through high school. After that, he says his parents wanted him to go to college in the US. “Your future is brighter in the US than in Canada,” he says. So the family moved south. Laroche went to college, found the YMCA and then, eventually, The Boys and Girls Club.

Starting a culture shift at The Club

When he took over as athletic director, Laroche says he wanted to make some changes. “First thing I realized was that the atmosphere was a little cold. I wanted to make it fun. It didn’t take long. I saw smiles and joy. I started a culture shift with the kids,” he explains.

Making an impact in the gym was a natural fit for Laroche. “Sports was my first love,” he says. “It was always sports.” His enjoyment of sport was infectious. He added games like floor hockey, golf and roller hockey. He added all-star games and kept standings to make the basketball leagues more exciting. With 120 kids coming through The Club a day, there needs to be a lot of variety.

Making it fun for everyone, no matter their skill level

Something Laroche says he sees as an “opportunity” is how to create an environment where kids who aren’t superstars can feel comfortable participating with kids who are. “The kids want to have a good experience. You need to give them a secure feeling that they don’t have to excel.” For those who want more intense competition, there are plenty of places for them to play. It’s much harder to give the kids who just want to experience the enjoyment of sport in a competitive (but not too competitive) of an environment.

Embracing the idea of being a leader

For 15 years, LaRoche focused his attention on the sports programs at The Club. However, his insight into other areas was sought out. “Scott (the former branch manager) told me, ‘I wish you’d speak up more.” So when Scott announced he was leaving after three years, Laroche saw an opportunity. If he were to take Scott’s place, he would be in a position to not only speak, but be listened to. “I decided to try and be more of a leader. I thought if I were to be chosen (as manager) I could probably have an impact. That was my motivation.” After what he describes as a “rigorous” interview process, he was given the position.

His longevity has helped him know what families need

His longevity at The Club has served him well. “I got to work under a lot of different branch managers,” he says. “I got to see how they did things. I had an almost inside look at what the kids want and what the families need.” And changes have been made already.

“I started to lead by example,” he says. “We’re not doing the kids a favor by working here. It’s the other way around. Working here is important work. It is serious work. Whether it’s in the gym, the art room or playing games, it doesn’t matter. It needs to be taken seriously. I’ve definitely seen a shift in culture,” he says.

He and the staff at The Club have worked to create new and exciting programs for fall. And while there is always something The Club needs, when asked what he would do if he were presented with a blank check, he doesn’t think of buying more “stuff.” Instead, he says he’d just like to be able to reach more kids.

The Club provides a unique experience

“We can handle more kids,” he says. “What has happened throughout the years is there are more groups providing more things. There are more choices. Here, kids can make up their own mind. They can make their own friendships in their own environment. It’s different from an AYSO practice.” And that is why he is so committed to The Club and its mission. If run well, it provides a unique experience for its members that he wholeheartedly believes in.

And while he has only been a manager for a short while, he wouldn’t be opposed to continuing to work his way up the ladder of command. “I would like to have an even bigger impact,” he says.

Running The Club is a team sport

In the meantime, he is pleased with how things are going in his new position. “I’m pleasantly surprised to see how things are so easy,” he says. “The support I have from kids and families, I’ve earned respect throughout my years here so there has been no conflict.” Laroche mentions more than once that he is just part of a larger group committed to serving the kids. There is no room for anything that might diminish The Club’s mission. “This is a team effort. We all have to leave the politics behind and come here with the sole purpose to serve our kids,” he says. Despite his gentle manner and soothing accent, it is clear that nothing less than that will do.